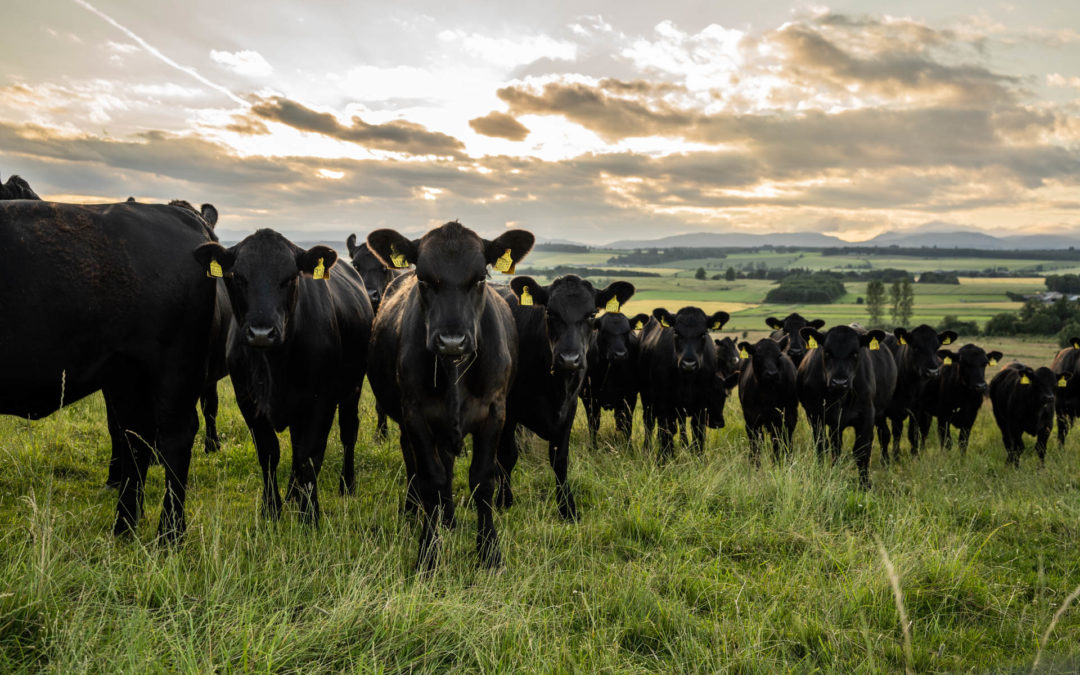 Recent years have seen a growing scepticism towards eating meat, fuelled by knowledge of the environmental impact of intensive livestock farming. This has led to a shift towards vegetarianism and veganism in the population, and even proposals to eliminate meat from our diets. However, we at Newmiln believe that meat can be produced in an environmentally-friendly way, and have sought to promote our pastoral farming practice as a way forward for livestock farming.

This is seen in their effect on a farm’s insect diversity: the fields of white clover created for our cattle are a bonanza for bees, butterflies, and other pollinators, while cowpats draw in dung beetles. The latter then help recycle bacteria into the soil, reducing the risk of infection in our animals. We also create herbal leys for our grazing animals, with plants such as comfrey, yellow trefoil, plantain and chickory. These in turn improve the grazers’ health, by stabilising the bacteria in the rumen and killing parasites.

But perhaps the most important advantage pastoral farming offers is its remarkable ability to store carbon. By creating areas of natural grasses and wildflowers, grazing livestock help stabilise the soil, reducing carbon escaping, and encourages the growth of plants that absorb greenhouse gases. The aforementioned white clover, for example, has remarkable nitrogen-fixing properties. The newly fertile soils also support soil biology including earthworms, fungi, protozoa and bacteria, which themselves aid carbon retention by breaking down dead plants and recycling them into the soil.

Here the importance of livestock to augment carbon retention in soils should be stressed. Carbon storage is maximised with a medium height and a wider diversity of grasses, both of which are maintained by the low-intensity grazing system we use on our land. In turn, this range of grasses contain fumaric acid which when eaten by ruminants reduces their methane emissions. This is a habitat that is engineered to preserve carbon in its soils.

The current “eating meat is bad for the planet” advice is based on cattle rearing systems that are heavily reliant on corn, soya and grain based inputs in intensive rearing systems. These also have the impact of lowering a animals pH in their rumen, leading to a range of nasty consequences for that animal which include low dose antibiotics becoming routinely fed to cattle, which has its own set of problems, including its contribution to antibiotic resistance.

Cattle and sheep evolved to eat grass, and thrive on it. Let’s let them eat it. Common sense here equals climate sense, and also farming sense, especially in this part of Scotland, where rain is relatively plentiful. Yes the meat from animals reared this way does cost more, but that is without putting a monetary value on the environmental and animal welfare costs associated with meat produced in an intensive way. If we were able to do that we may be surprised at the result.